Haydn Morris, an inspirational Director of Sport at UEA, has passed away at the age of 92. 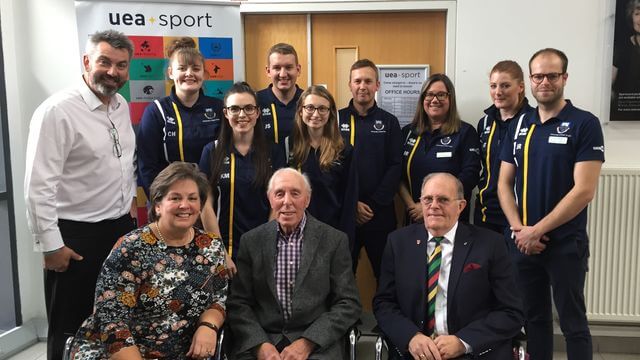 Haydn started at UEA in 1968 and retired from his role as Director of Sport in August 1990. He was an inspirational figure for staff and students who will be greatly missed by the UEA community. When he retired, University sport was on the verge of great change and this was because of the foundation that he had created that those changes and the Sportspark development came to fruition.

Haydn visited UEA in November 2018 when the Sportspark team invited him in to view how the University Sport department had changed.
Phil Steele, Director of Sport and Commercial Services, commented, “It was easy so see why he was so well liked and admired; he oozed enthusiasm for sport at the age of 90, and had the kindest of words for the sport and activity programme we now offer on campus.”

Rachel Tomes, Assistant Director of Sport at UEA from 1988 – 2017 added: “When you entered the Sports Centre, which was then in Congregation Hall, you were always made to feel like part of a big family, whether you were a student, staff or member of the local sporting community.
“He was so knowledgeable and professional in every regard and treated everyone with kindness and respect. I had the great privilege of working with Haydn in the years just before he retired, and even after such a long career he was still so full of energy and so interested in everything and everyone.

“I had enormous respect for him, we had a wonderful working relationship, and I learned a great deal in a short period of time, we remained friends ever since and enjoyed a 33yr friendship.

“He was also incredibly humble, I remember telling him how much he would be missed when he retired and he simply replied in that soft welsh lilt that his impact would be like a grain of sand dropping in a bucket of water, the ripples would stop before they even reached the sides – I’d would like to tell him now, on behalf of the thousands of students and staff whose lives he touched….. he couldn’t have been more wrong. He was a true gentleman”.
To others Haydn will be remembered for his on-field rugby career. Born in Mountain Ash South Wales he eventually joined Cardiff Rugby Club and was capped for Wales scoring tries against Ireland and France in two of those games. The highlight of his career, as he was quick to point out on his UEA visit in 2018, was touring South Africa with the British Lions in 1955 scoring nine tries in eight matches.

No matter what your connection, Haydn epitomised the best of core values – family, respect and commitment and these are very much at the heart of UEA and its Sport Department today!

See below some images from Haydn’s time at UEA. If you have any memories of Haydn you would like to share we would love to add them to this page. Please email sportspark@uea.ac.uk

I worked in the ‘old’ Sports Centre as Assistant Director of Sport under Haydn and alongside Tony Settle from 1980 – 1987.

I have some wonderful memories of Haydn and although I can’t possibly share them all here are a few:

Haydn’s Thursday lunchtime ‘Sweatshop’ held regularly every week at 1.00pm in the Sports Hall. I will always remember those words:
“First man away!” “First lady away!”

Haydn totally supported student sport and when the University started to ask for a greater financial contribution from the Sports Centre it took a long while before we brought in student and staff charges for our facilities. It was a great sadness to him that we had to do this and he was much relieved when students remained faithful to the Sports Centre.

He was a wonderful listener and I can remember the Student Club representatives often coming to see Haydn and tell him of their issues. His door was always open for the students.,
Haydn played a very active role in student sport, coaching the UEA Rugby team for many years. He was also active himself, often seen jogging around The Broad as well as practising golf in the Practice Hall!

He was persuaded to take a Sabbatical at the University of Tennessee (I think this was the university) and although reluctant at first, he did enjoy the experience.
He coached some rugby there and when he came back he was so embarrassed that they had insisted that he was known as ‘Prof’ ! He never wanted high recognition for anything.

I could go on …….I learnt so much from working with Haydn, mostly about managing people and dealing with difficult people. He was so good at dealing with those who wanted ‘a fight’. Haydn always ‘won’ and I can remember people leaving the office happy having been satisfied from what they had heard Haydn say to them, having entered armed with their complaints.

Unfortunately, I lost touch with Haydn and Jean when I moved away from Norwich for a while, but his brilliant smile and happy personality will always remain with me.

A lovely man and he will be sadly missed by many people. He was an influential part of the sports community in Norwich.

I was a member of a pretty decent UEA rugby team in the mid/late 70s, which got thorugh to the quarter finals of the UAU Champinship in 1977 In those days only the big rugby playing universities, such as Durham, Swansea, Loughborough got that far, so we were definitely ‘punching’ well above our expected level.

We played regularly against some pretty determined Norfolk & Suffolk rugby teams – who had less than gracious views about students and their commitment to rugby .

We got through to the final of the Norfolk Cup and on a notable occasion beat a full strength Norwich team.

Haydn was a wonderful, wise, charming, loyal coach with twinkly eyes and even twinklier feet.

His litting turn of phrase, never shouty or harsh – but always pointed will be recalled by those who he coached

Sad news for all who remember him. 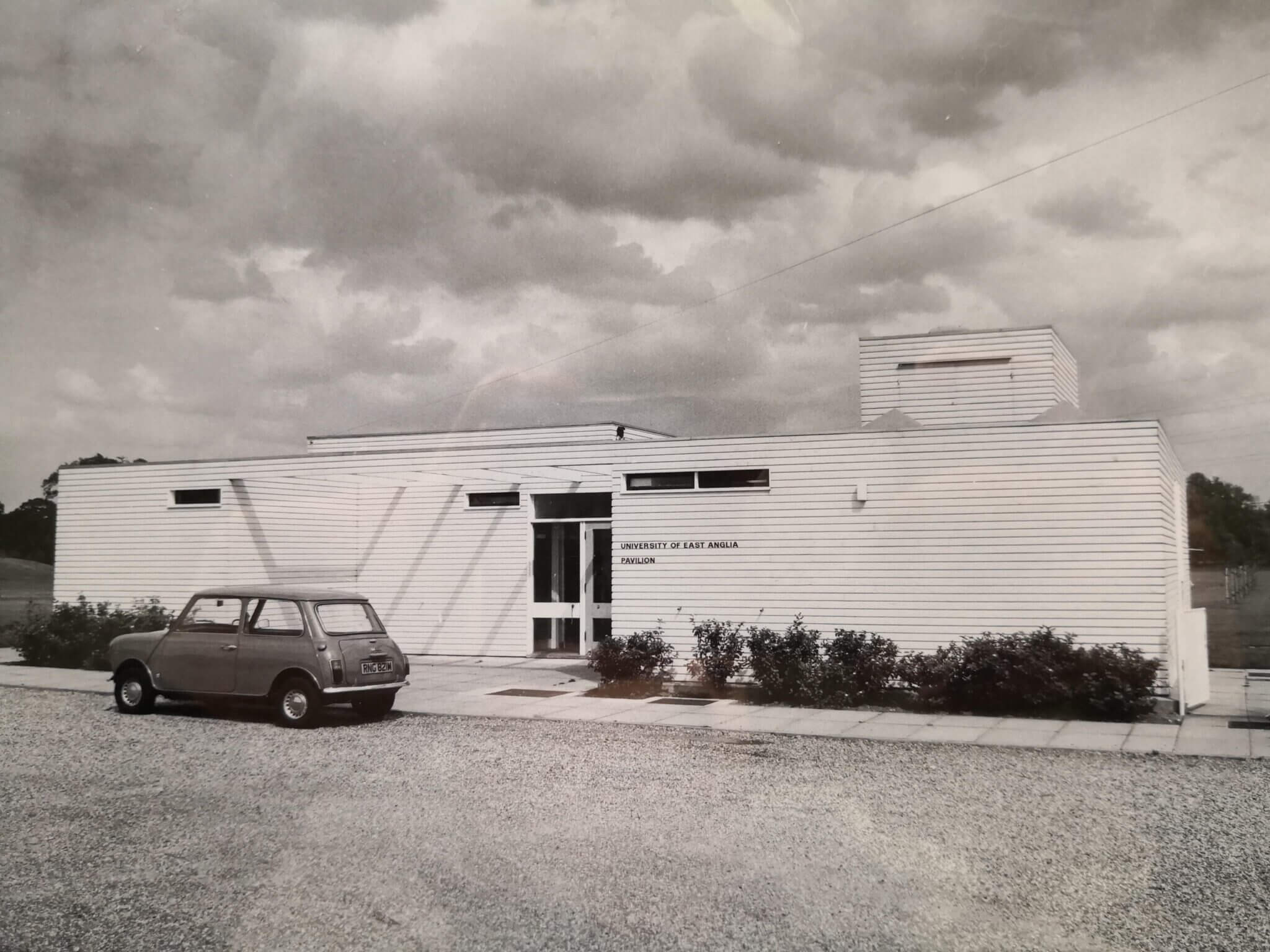 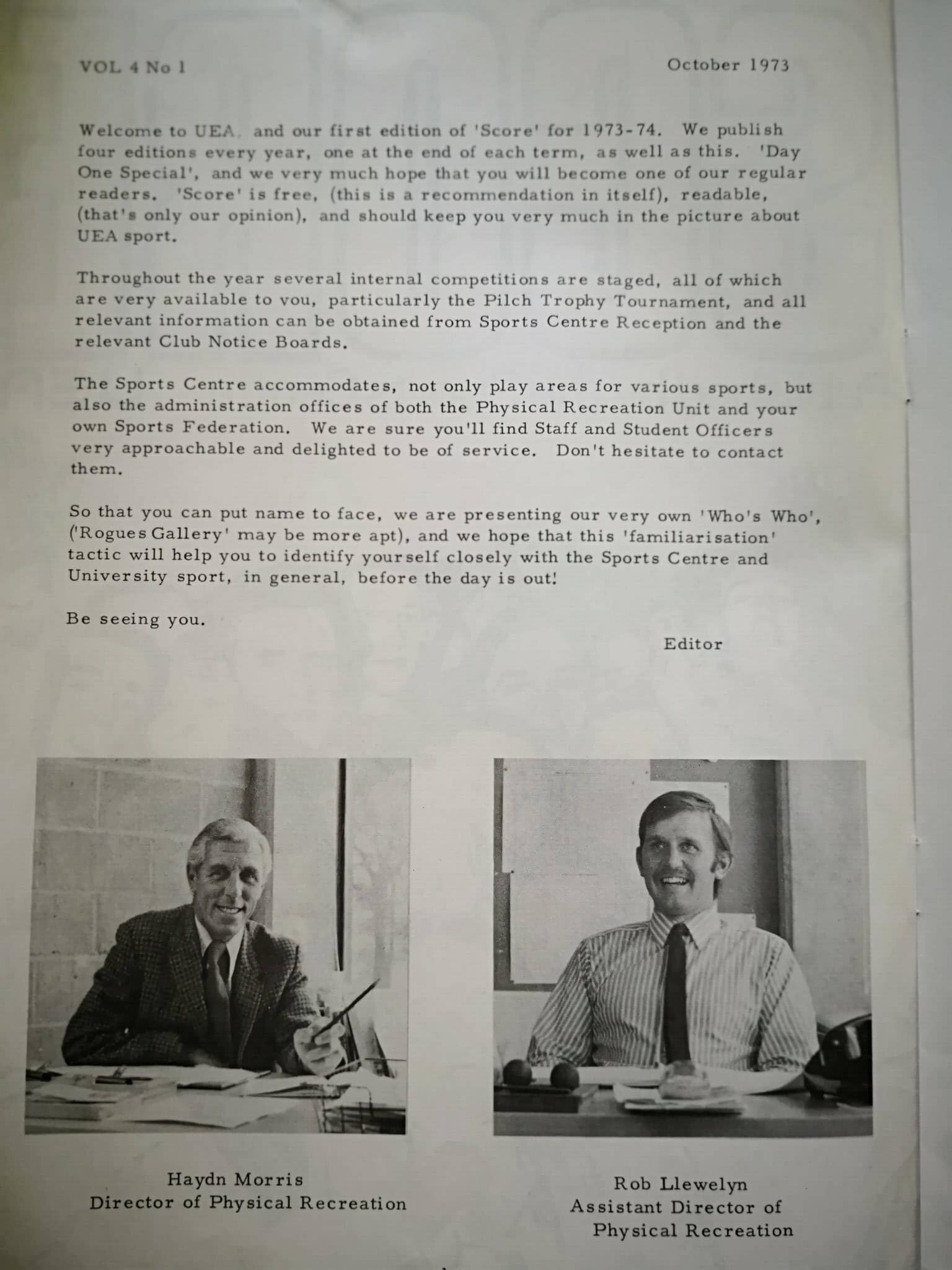 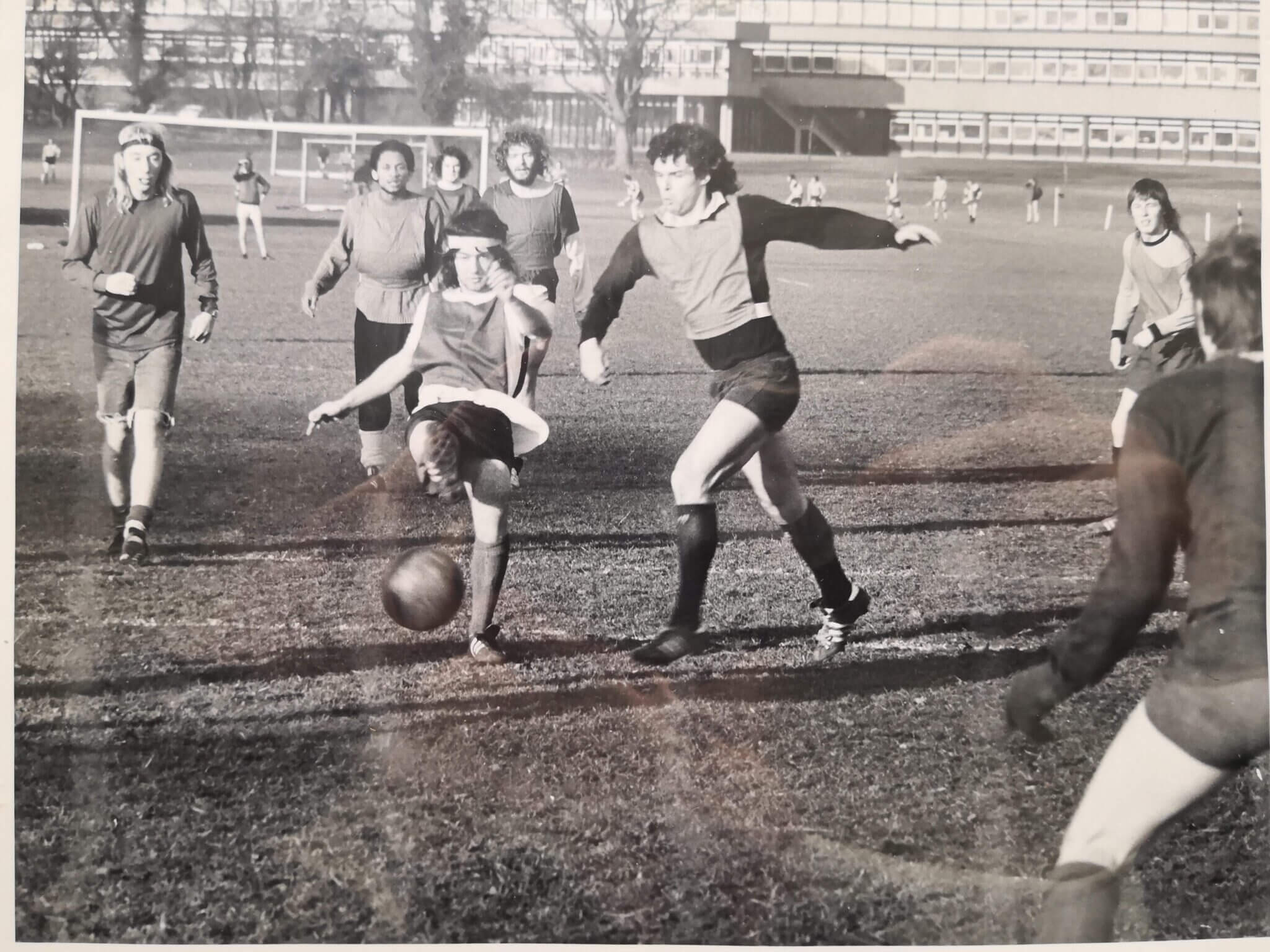 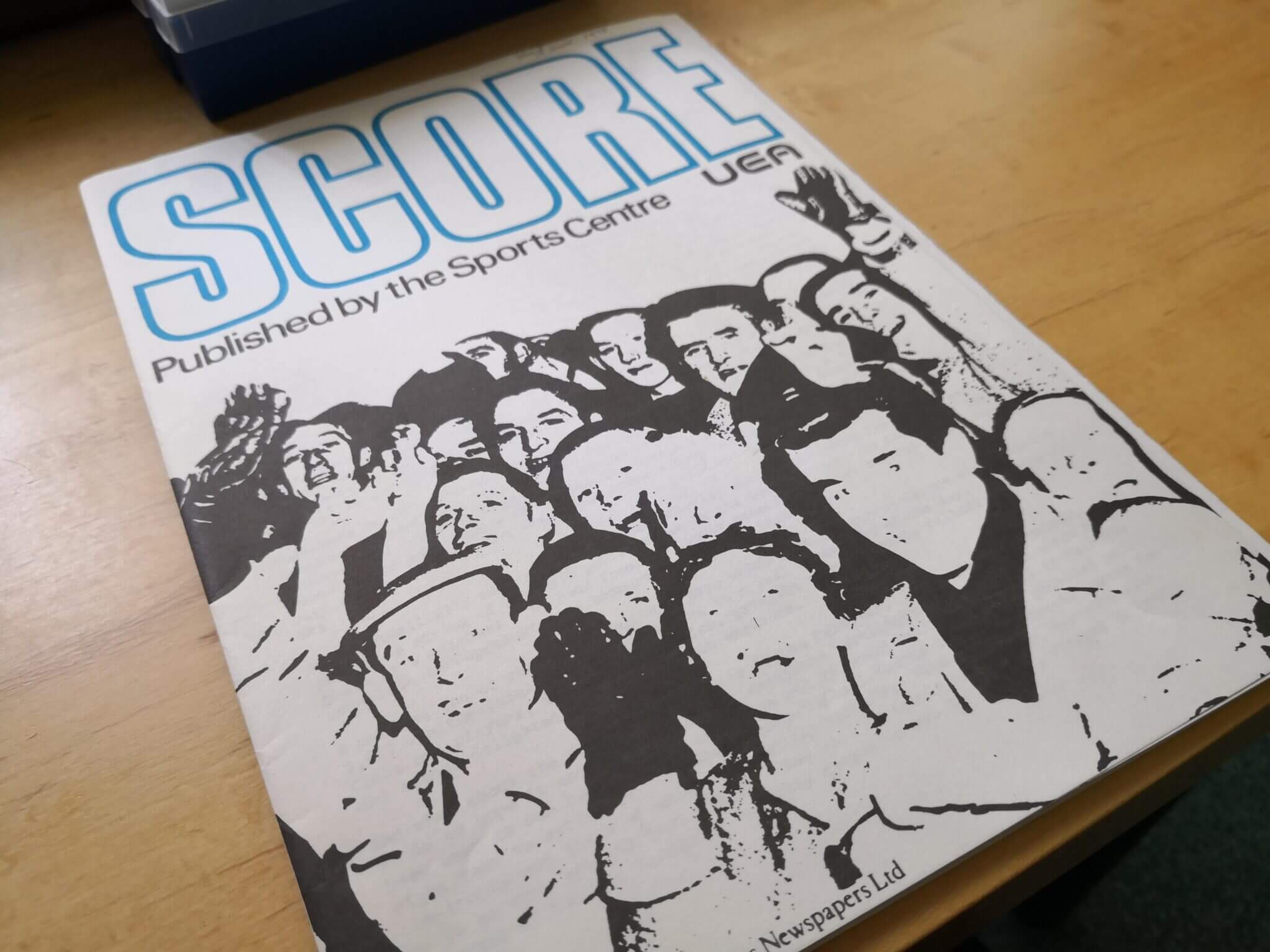 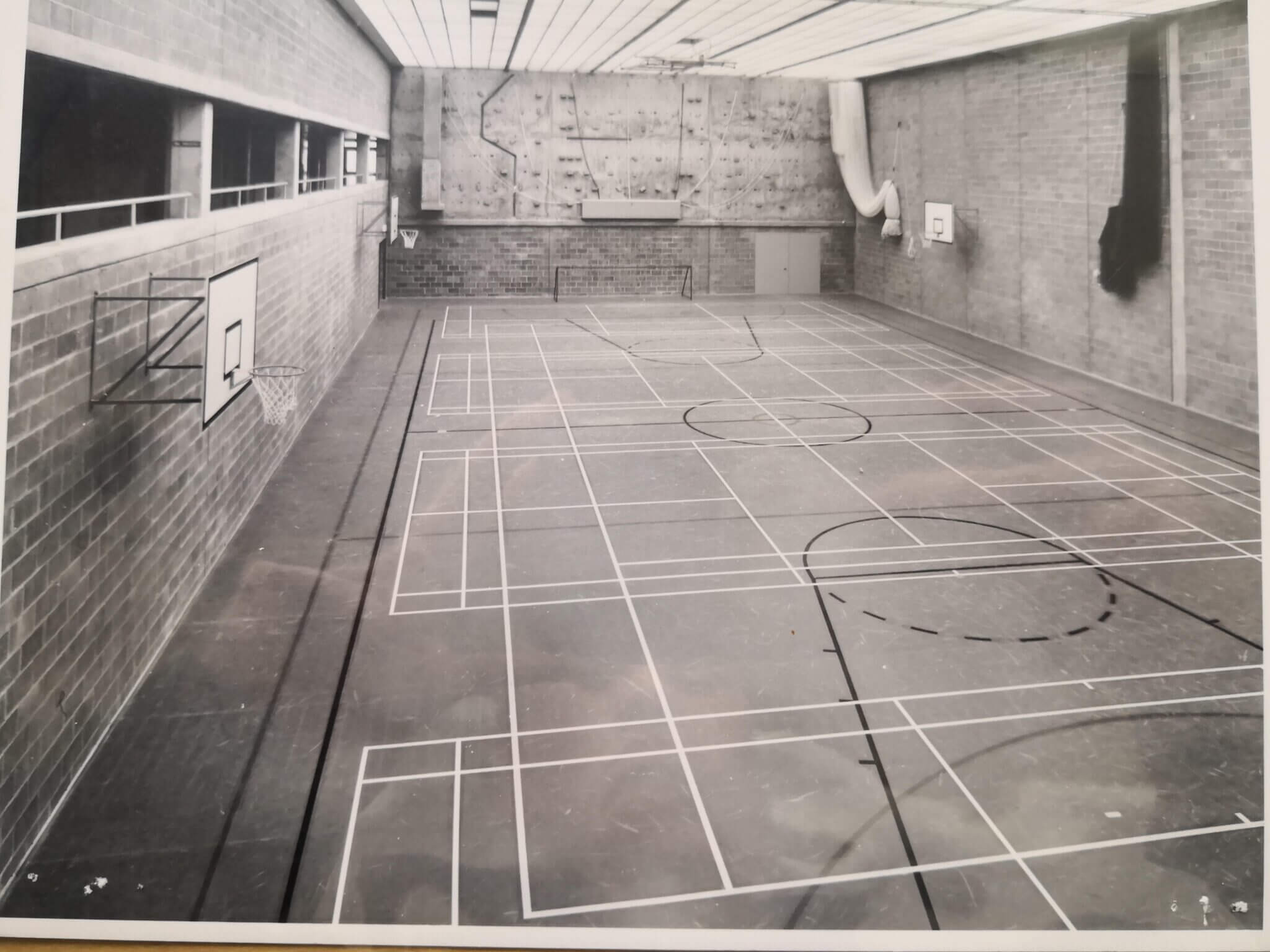 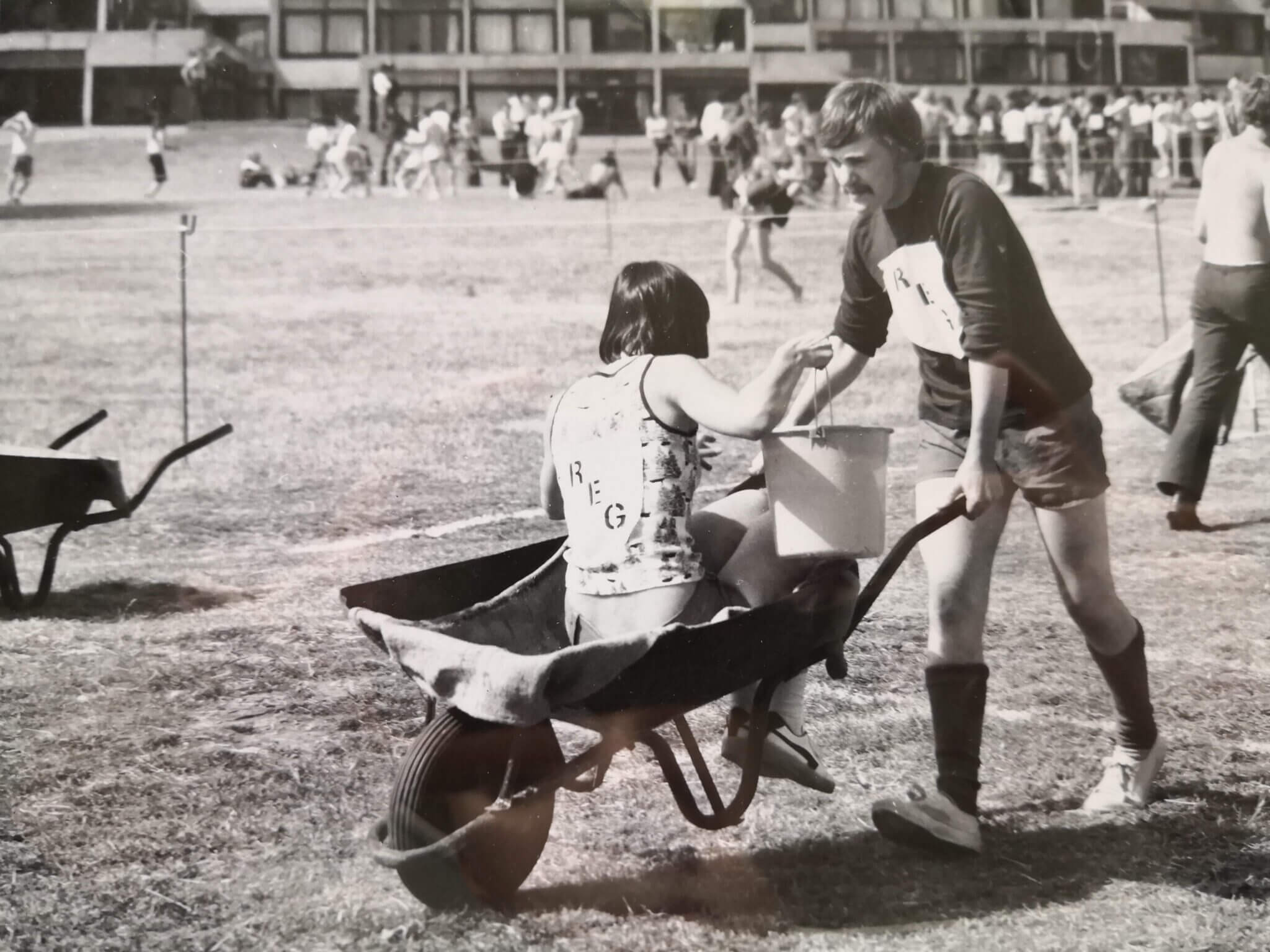